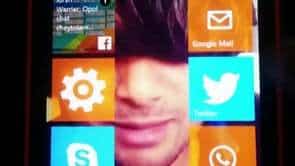 Tap on the Phone (memory) option from the settings – Storage Sense of Windows 10 Phone. Open up the application (Skype) which you want to move to SD card memory and Tap on Move to SD button. I’ve opened Skype app on Windows 10 phone.

You can see the apps are moving to SD cards. Once Windows 10 Phone application is moved to SD card then it won’t show up under phone memory.

So you will be able see the Skype application under SD Card memory Apps+Games menu in Microsoft Windows 10 phone.