SCCM 2012 R2 CU4 has been released, major update in CU4 is 36 new PowerShell cmdlets. Download SCCM 2012 R2 CU4 from here. Microsoft is going towards more automation. Microsoft’s strategy is very clear that they wanted to promote PowerShell and it’s very useful for admins. When you look at other technologies like Exchange 2013 etc.. you can see that loads of functions which can’t be performed with console (GUI) can be easily achieved via PowerShell command lets. I’m sure SCCM/ConfigMgr is also going in same way. So learning PowerShell is very important for ITPros !

We all are very much interested in SCCM 2012 SP2 (service pack 2) release dates. Microsoft has not announced date of SCCM 2012 SP2 release. However, there are some rumors that it (SCCM 2012 SP2) may get released before Microsoft conference Ignite which is scheduled for May 2015.

So what about SCCM/ConfigMgr vNext version? Release date of ConfigMgr vNext? I’m not 100 % sure. But we can expect more news about this during the same Microsoft Ignite conference. From the below blog post, it seems to me that Microsoft is planning to ship Next version of SCCM 2012 in the same time frame of Windows 10 release. Is it really possible? Because, Microsoft is not yet released the Preview version of SCCM vNext! Windows 10 will be released in late 2015? Could be some where around Sep or Oct 2015 ? All these will be confirmed in Windows Ignite conference.

Also, Microsoft already confirmed this via blog post here (Windows Server and System Center roadmap update). “we plan to release further previews through the remainder of 2015, with the final release in 2016. Our next preview is planned for the spring of 2015.  Windows Server will continue to share the same core technology as Windows and we will continue working together on solutions for our customers.  In fact, the next version of System Center Configuration Manager, which delivers support for Windows 10, will ship in a timeframe that aligns with Windows. “ 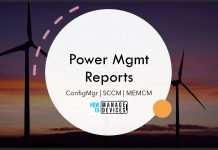