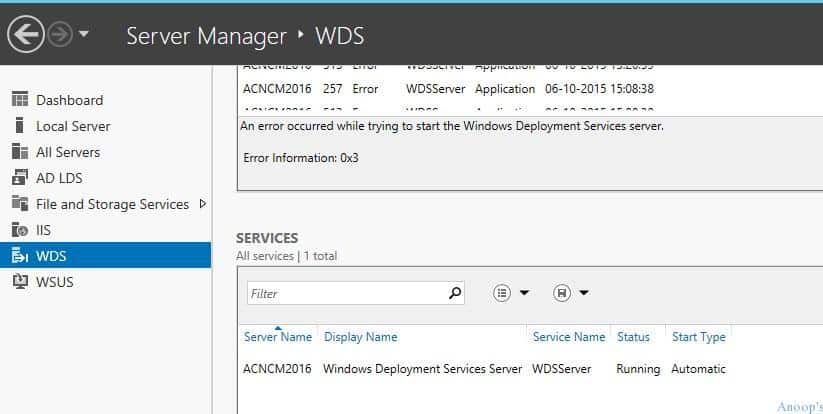 I wanted to try OSD (Windows 10 deployment) with SCCM /ConfigMgr vNext (2016?). SCCM vNext TP3 Primary server is installed on Windows Server 2012 R2. Enabled PXE role which is part of SCCM DP site system role. Once PXE role is enabled, SCCM will automatically take care of the prerequisite of PXE (Preboot Execution Environment) role called Windows Deployment Service (WDS). Windows Deployment Services is a server technology from Microsoft for network-based installation of Windows operating systems. WDS role has been installed on Windows 2012 R2. However, WDS service was not getting started. There is no log file called PXESETUP.log in SCCM 2012 and SCCM vNext version as PXE point is part of DP role. DistMgr.log will give you the details about PXE and WDS installation on the site server. If you are enabling PXE on a remote site system server then  you can refer to smsdpprov.log.

PXE role is installed successfully but WDS service was not getting started. I checked the event logs and following are the some of errors related to WDS services….

An error occurred while trying to initialize provider WDSMC from C:\Windows\system32\wdsmc.dll. Windows Deployment Services server will be shutdown. An error occurred while trying to execute the command.
Error Code: 0x54B
Error Description: The specified domain either does not exist or could not be contacted.
C:\Windows\system32>set l
LOCALAPPDATA=C:\Users\anoop\AppData\Local
LOGONSERVER=\\ACNCMDC

The issue was related to domain control network connectivity. I’ve deleted the Virtual Switch which I created in Hyper-V console and recreate the Virtual switch with internal option. Removed the PXE and WDS, restarted the server and enabled the PXE point again. This time it started working.