Following are the three posts that will cover the Windows endpoint backup solution from Veeam.

Veeam Agent for Windows restores options are explained in the video tutorial here. Once Veeam FULL Backup of Server 2016 is completed? Then, open up VEEAM BACKUP BROWSER to restore. There are two restore options available from the backup browser, and the last one is the recovery option from Veeam recovery media.

Veeam Backup Browser or File Level Restore wizard should be used to recover or restore If some files and folders on your computer get lost or corrupted. For file-level restore, you can use backups of any type:

Veeam BACKUP Browser is similar to file explorer. It gives two options to restore in my scenario for this video. I selected the KEEP option. This will create a copy of the restore and won’t overwrite. Restore is completed. The windows 10 ISO file got restored within 1:23 minutes, as you can see in the video tutorial here.

When we perform a volume-level restore, Veeam Agent for Microsoft Windows restores the entire content of the volume. We can’t use the File restore wizard to recover the specific volumes. It retrieves from the backup data blocks about a particular volume and copies them to the necessary location.

The volume-level restore should be done via the “Volume Level restore wizard.” We need to go through and define following the wizard:-

About Author -> Anoop is Microsoft’s Most Valuable Professional Award winner from 2015 on the technologies! He is a Solution Architect on enterprise device management solutions with more than 20 years of experience (calculation done in 2021) in IT. He is Blogger, Speaker, and Local User Group Community leader. His main focus is on Device Management technologies like Configuration Manager, Windows 365 Cloud PC, Intune, Azure Virtual Desktop, Windows 10, and Windows 11.

Let’s see Windows Server 2016 Backup Solution from Veeam. Veeam has a backup and restores solution for Microsoft Windows devices. Veeam Agent for Microsoft Windows can be used to take backups of servers, desktops, and laptops. Previously, this solution was known as “Veeam Endpoint Backup.” In this post, we will see Video Guide Windows Server 2016 Backup Solution from Veeam.

Following are the three posts that will cover the Windows endpoint backup solution from Veeam.

In this video guide, we will see:-

How to Create Recovery Media for Server 2016

You can boot your computer/server with recovery media and fix the OS system errors on your server 2016 or restore data from the backup. Microsoft Windows RE (Recovery Environment) automatically reboots after 72 hours of continuous use. All data that has not been saved before reboot will be lost.

You can launch the recovery media creation wizard from the Veeam Agent for the Windows home page. Media creation is a straightforward process, as you can see in the video tutorial here.

It took near about 9 minutes to create a recovery media on my server 2016. The wizard will prompt to format the USB during the media creation process. On high-level following are the tasks:-

“Configure backup” is the Veeam agent’s option to start configuring and scheduling the backup for the Windows server. Back up your entire server is the recommended option in the Veeam Agent for Windows. This helps with fast recovery on any level.

I selected the Entire Computer backup option for my server 2016. I used the external hard disk (local storage) to take the backup of server 2016. This is my Hyper-V server in my lab. More details are available in the video tutorial here. Following are the tasks which I could see:-

About Author -> Anoop is Microsoft’s Most Valuable Professional Award winner from 2015 on the technologies! He is a Solution Architect on enterprise device management solutions with more than 20 years of experience (calculation done in 2021) in IT. He is Blogger, Speaker, and Local User Group Community leader. His main focus is on Device Management technologies like Configuration Manager, Windows 365 Cloud PC, Intune, Azure Virtual Desktop, Windows 10, and Windows 11.

I tried with NetBIOS name of the domain and full FQDN without any success. I was confident that the DNS server is configured correctly on the newly build server. The entire troubleshooting and Domain join processes are explained in the video here.

The DC server was not reachable from the newly build server because of firewall configurations on the local server. I disabled the firewall on the server, and that resolved the reachability issue.

C:\Windows\Debug\dcdiag.txt is the log file which can provide us more details when you have any issues with domain join.I checked the DCDIAG.log file, and it gave more details about the domain join issue. 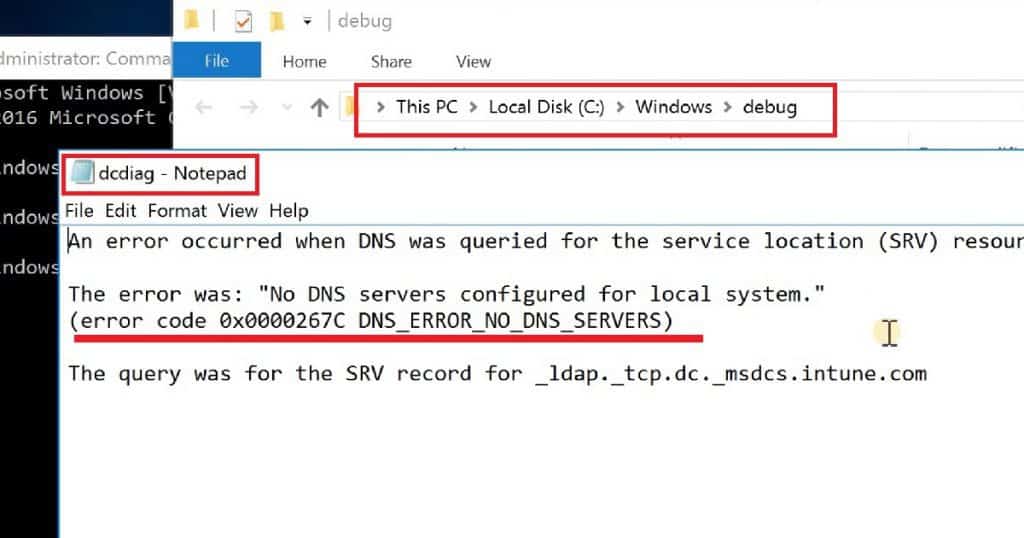 The domain name was correctly mentioned during the server 2016 domain join process. Also, the server can ping the domain and DC.But when I checked the host file of the local 2016 server, then there were some entries of domain name mapping. I deleted those entries from host file. Also, I checked the IPCONFIG information on the server and noticed that the DNS server IP was not configured. Rather DNS server IP was configured as gateway device IP. I removed the gateway IP and correctly configure the DNS server IP in the IPCONFIG utility. More details available in the video below.