I had blogged about a number of Role Based Administration Gotchas ConfigMgr SCCM 2012 SP1 RBA Gotchas and Implementation Guide. One of my topic in that is Newly installed DP is Not Visible for Infrastructure Administrator more details here.

Earlier all the installed DPs were assigned to DEFAULT security scope and that was not ideal situation when you’ve very complex environment with CAS and loads of primaries.

2. DP installs successfully but it won’t be visible for SCCM 2012 admin in his console.

3. Where as SCCM 2012 CAS full administrator can view the DP and it’s installation status etc…

Happy that this issue got resolved in SCCM ConfigMgr 2012 R2 !! 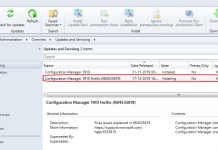