Language is a structured communication system that helps you communicate with one another, build relationships, and create a sense of community—different types of languages are used in writing. Directive, expressive, and informative language are the three most significant types.

In Windows 11, the number of language pack-supported languages has increased from 38 to 43. You can easily change the default display language in Windows 11 and add more than one additional language. Changing the display language will change your user account and is not changed on the Welcome screen.

What are the Advantages of Installing Additional Languages in Windows 11 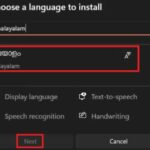 Windows allows users to change the display language from one language to another, including Spanish, French, German, Arabic, etc. The following are the advantages of adding additional languages in Windows 11.

How to Install Additional Languages in Windows 11

You can easily change the existing language or add additional languages in Windows 11. The following are the steps to add other languages to Windows 11.

Windows Settings is a software control panel component that allows users to adjust their user preferences, configure the appearance or actions in an application, operating system, or hardware, and manage their connected devices.

After selecting language & region from time and language, the below window will appear and show the settings, such as Windows display language and the preferred languages.

While clicking the “Add a language” button, the “Choose a language to install” window will appear with all the supported languages. The user can choose the desired language by either scrolling down or searching for it using the search bar.

Below the language list or next to the language, you can also see a legend with an icon to tell which features are supported in which languages. Most languages can be used as a display language, and many also support handwriting recognition.

Some languages support Text-to-speech and speed recognition features. The Malayalam language support only the Display language feature ( see the below screenshot)

After clicking the Install button, the below window will appear and show that the Malayalam language is started downloading. Malayalam is spoken mainly in India, the official language of Kerala. You can easily choose one of the languages from the language packs according to your preference.

After installing the Malayalam language, you can see in the screenshot below that the two languages are in the preferred languages section. One is English (United States), and the another is Malayalam.

Language Options from a Specific Language

Click the 3 dots next to the language you just installed, and it shows the settings such as Language options, Move up, Move down and Remove. The below table and screenshot show the language settings and their uses.

Under the Preferred languages section, click the 3 dots next to the language you just installed or the language installed by default, and select the Language options from the below screenshot. It will show the options such as Language features and Keyboard settings.

The installed keyboards for language-specific key layouts and input options. The Add a keyboard button shows the options such as Malayalam inscript and Malayalam phonetic (input method editor).

You can easily add or remove language features in the below. If you want to change them after installing the language pack, follow the steps below to remove the installed Keyboard.

In the below keyboard layout window, you can see the default language and the added language, which is the Malayalam language in my case. You can easily change the keyboard layout by clicking the language notification section in the Taskbar.

How to Change the Keyboard Default Language

There are 2 different ways to change the Keyboard’s default language. Changing the keyboard default language using Windows settings, and the second one is the taskbar language section method.

The screenshot below shows the windows settings method to change the Keyboard’s default language.

Select the language you want as the default keyboard language from the below screenshot. The language list includes 2 languages one is English (United States), and the other is the Malayalam language.

You can easily change the Keyboard’s default language by clicking the language notification section from the Taskbar. Two languages are in the keyboard layout, and the English US is the default keyboard language.

A virtual keyboard is a picture of a keyboard displayed on a computer screen. You can use the following steps to open a virtual or on-screen keyboard in Windows 11.

About Author – Vidya is a computer enthusiast. She is here to share quick tips and tricks with Windows 11 or Windows 10 users. She is also keen to find solutions to day-to-day tech problems and write about them.